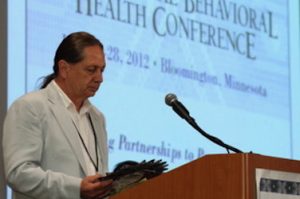 McClellan Hall is Cherokee, with roots in Oklahoma.  He is the Founder of the National Indian Youth Leadership Project.  Mac is a graduate of the Native Teacher Education program at the University of Washington and holds a Masters in Education from Arizona State University.  Mac is a former teacher and principal of two tribal schools.  He is currently a member of the SAMHSA Native American Center for Excellence Expert Panel on Prevention, the SAMHSA Executive Committee on Suicide Prevention and Co-lead of their American Indian/Alaska Native Task Force on Suicide Prevention.  Mac is the developer of Project Venture, a SAMHSA/NREPP Evidence-Based program.  He and Pauline, his wife of over 30 years, spend most of their time in Santa Fe, NM, where they are helping raise grandchildren.  Mac is the recipient of several awards, including the Kurt Hahn Award, from AEE, the Spirit of Crazy Horse Award, the Alice King New Mexico Public Service Award and the 2012 Indian Health Service Behavioral Health Achievement Award.  Mac has collaborated with Bart Crawford on projects in Indian Country, both in the US and Canada, since 2005.